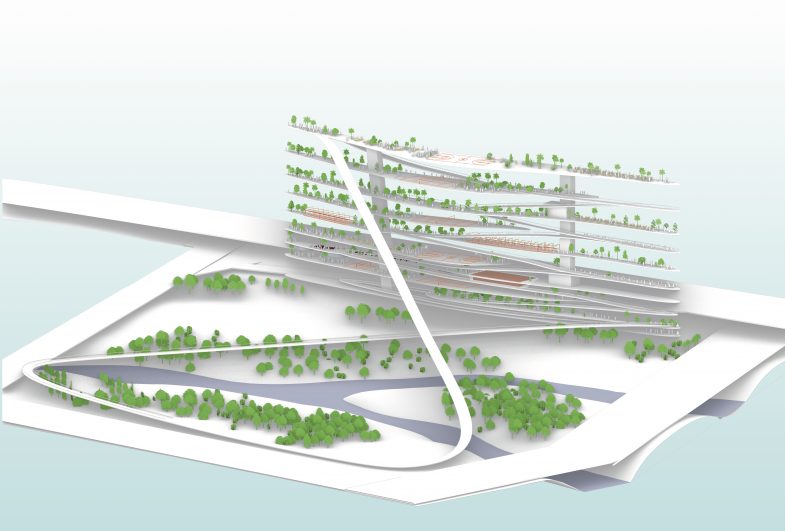 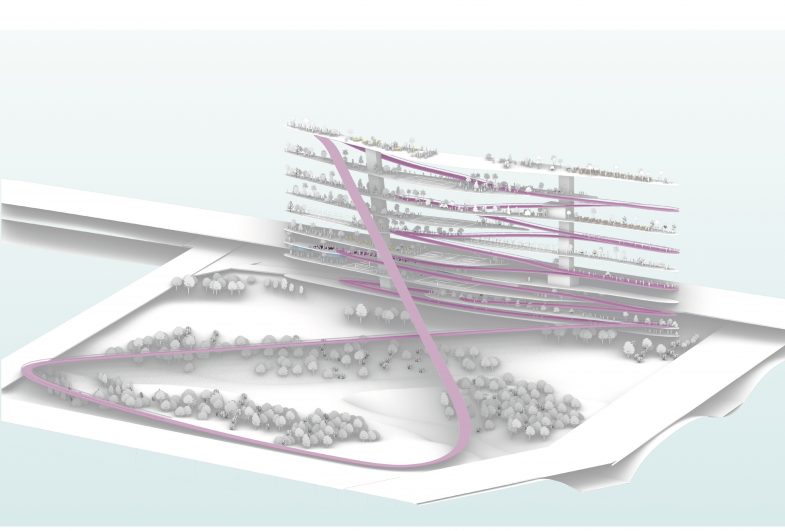 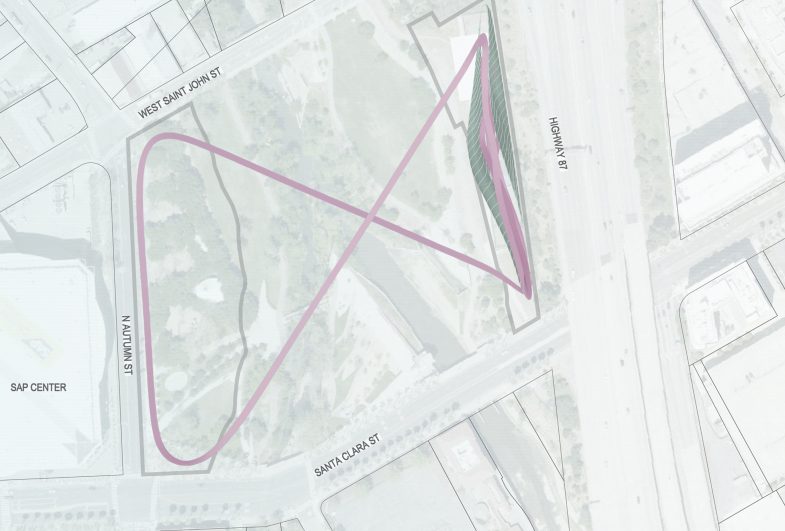 We propose to literally take Arena Green and San José to new heights by expanding the existing park into the sky along the high way to create a high park: the Sky Park.

An unprecedented experience: a public space in the sky, manifold possibilities for people to gather for many diverse activities with glorious views over San José Valley. Additionally, it shields Arena Green from the highway.

A public pathway winds through the site like a gymnast’s ribbon, crisscrossing Arena Green to connect the river shores horizontally and the ground and the sky vertically, bringing together east and west, up and down, taking many forms: ramps, a bridge through the treetops, a ramp through the new sky park, a funicular connecting the southwestern corner at street level directly with the northeastern corner in the sky.

The Sky Park extends over several levels, connected via ramps, elevators and escalators. There is space for many activities: sports, assembly, play, meditation, swimming pools, cafés, restaurants and most importantly: free spaces to be interpreted by their users.

The Sky Park is full of plants: trees, bushes, flowers, meadows. This synthesis of greenery, multifunctional areas and incomparable views make it a unique public place.

The lush vegetation on platforms open to the air – making the most of San José’s mediterranean climate – turn the park into a giant air purifier, setting an example for buildings to come, in San José and elsewhere.

The overall vertical structure is shaped like a sail flowing in the breeze, undulating and curving like rolling hills turned skywards – alluding to californian landscapes and to nearby ocean sails.

Its narrowed ends accentuate its thinness in the Skyline of San José, especially when seen from the highway – an almost surreal experience.

The park is open to the air, exposed to the climate, allowing plants and visitors to breathe. The only skin is a metal mesh of varying density underlining the structure’s flowing shape, acting as an antifall guard as well as supporting structure.

The park acts as a lighting device in three ways: firstly, gentle internal lights keep the park usable to visitors during darker hours, like a glowing sail in the San José’s skyline. Secondly, external lights shine downwards onto Area Green, highlighting selected areas. Thirdly, the structure’s skin acts as a giant screen, transforming area green and its the surrounding cityscape into an outdoor cinema – without disturbing the air traffic above.

From Body Movement to Sculpture to Space